There's been quite a few bizjet movements around CQ over the last few days - some already mentioned below - here is a quick summary.


While calling into Hamilton Island Airport on Saturday 8 April was Homada Pty Ltd Cessna 560XL Citation XLS VH-XCU.  It called in from Melbourne (Moorabbin) and Melbourne (Essendon) Airports.  After staying for the night, it departed back to Essendon and Moorabbin on Sunday 9 April.

And slightly smaller (and not bizjets) were a pair of New South Wales-based Beech 58 Baron aircraft that were noted departing Hamo for Moree and Bankstown on Saturday 8 April.  VH-JML had arrived from there on Friday 7 April while VH-JKL seems to ride out Tropical Cyclone Debbie having arrived on back Monday 20 March.

Back on the mainland at Mackay Airport, on Monday 10 April, the Queensland Police Service (Airwing) Cessna 560 Citation Ultra VH-PSU was noted arriving from Townsville.  It later departed to Brisbane.  VH-PSU also visited Longreach Airport from Brisbane on Saturday 8 April.

And - as mentioned below - sistership VH-VVI "Ambulance 451" had a busy weekend visiting Emerald and Longreach Airports on Saturday 8 April and Sunday 9 April respectively.

Also at Longreach Airport, Beech B200 King Air VH-ISS was noted calling in from Winton on Monday 10 April before it later departed to Archerfield.  It had called in from Archerfield on Sunday 9 April.  VH-ISS looks to have recently taken up residence in the South-East corner from Tasmania and has been operating most out of Archerfield and the Gold Coast. 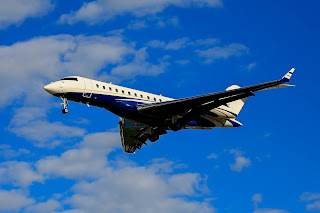 And arriving into Mackay Airport on Sunday 9 April was locally-based Embraer EMB-550 Legacy 500 N142GZ which finally returned home from Sydney.  It had departed to Brisbane in late March.

Finally, on Monday 10 April, Brisbane-based Cessna 525A CitationJet2 VH-MOR arrived into Biloela / Thangool Airport from its Archerfield base.  It seems to be staying for the night.

Photos taken by Bernie Proctor and Leroy  ©
Posted by Damian F at 7:57 PM