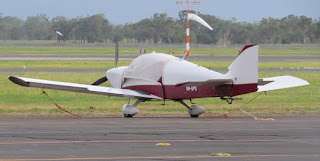 It was noted flying into Rocky from Biloela / Thangool Airport on Monday 17 April having earlier flown North from RAAF Base Richmond and Moree (New South Wales).  On Tuesday 18 April, it looked to fly from Rockhampton Airport from Emerald and back.

Meanwhile, also noted visiting Rockhampton Airport on Tuesday 18 April was the Queensland Government (State of Queensland) Raytheon B300 Super King Air VH-SGQ which had a busy day of flying from Brisbane to Rocky and then Townsville and Cairns.  It later returned to Brisbane over the same route.

While visiting Rockhampton Airport from its Sunshine Coast base was Becker Helicopter Services Beech 76 VH-BTO.  And Basair Australia Cessna 206 VH-NCR completed a missed approach at Maryborough and Rockhampton Airports while flying North from Archerfield to Mackay.  After refuelling at Mackay Airport, it returned South to Archerfield over the same route and again completed missed approaches at Rocky and Maryborough also on Tuesday 18 April.