During the afternoon on Tuesday 18 April, brand new Pilatus PC-12/47E VH-PIL touched down at Mackay Airport from Adelaide.  It stayed for the night and was spotted on the Western General Aviation (WGA) Apron early on Wednesday 19 April. 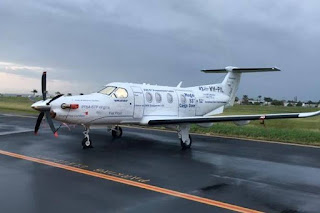 VH-PIL (C/N 1693) was only delivered to Pilatus Australia at Adelaide Airport last Monday 10 April after it arrived from Bali (Denpasar) and Broome.  It appears to wear a colour scheme promoting the aircraft so it possibly visited Mackay on a demonstration trip.

On Wednesday 19 April, VH-PIL departed to parts unknown before returning to Mackay Airport later in the day.  It then departed back to Adelaide.

This registration marking is quite popular (understandably) for Pilatus PC-12 turboprops - the fantastic 'AustAirData' website (http://www.austairdata.com.au/) suggests that this particular PC-12 is the fourth to wear this marking.

The previous PC-12 to be registered VH-PIL - also a PC-12/47E (C/N 1389) - was re-registered as VH-KWZ in January this year and has only recently visited CQ at Hamilton Island Airport last month - see Blog Post HERE.

And speaking of Hamilton Island Airport, a couple of recent interesting turboprop visitors have included Hawker Beechcraft G58 Baron VH-EZD which arrived into Hamo from its Monto base via Gladstone Airport last Thursday 13 April.  It returned to Monto but via Rockhampton Airport on Monday 17 April.  While Hinterland Aviation Beech B200 King Air VH-HLJ completed a return flight from and back to Cairns as HND780 last Friday 14 April.