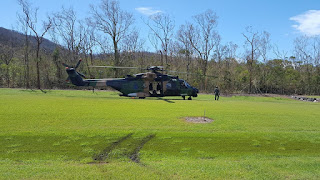 Later, it was believed to have called into Rockhampton Airport briefly before it was then heard to depart towards Emu Park.  A40-026 then later still arrived at Gladstone Airport.  It was heard to be using the radio callsign of "Poseidon 26".

A little later still on Sunday 2 April, a pair of Royal Australian Navy (RAN) NH Industries MRH-90 Multi-Role Helicopters were then heard to be flying together as "Poseidon Black".  These two helicopters then also arrived at Gladstone Airport were they were identified as A40-006 and A40-016.

A40-026 then completed a local flight before returning to Gladstone Airport where it re-joined A40-006 and A40-016 with all three MRH-90s being parked on the Gladstone Airport apron.  It appears that they are on stand-by to fly North to Rockhampton to assist during the pending flooding crisis expected to hit the beef capital later this week.


HMAS Choules was noted last week being loaded in Brisbane and is now in the Coral Sea off the North Queensland coast where it has provided assistance during 'Operation Queensland Assist' in the aftermath of Tropical Cyclone Debbie.

Meanwhile, also arriving into the Whitsunday Airport at Shute Harbour early on Sunday 2 April was Australian Army NH Industries MRH-90 Multi-Role Helicopter A40-036 which was captured on video arriving from the North as "Destrier 36".


You can certainly see from the video how much damage has occurred to the once lush rainforests in the Whitsundays region - most trees have been stripped bear of foliage - as if a bushfire has passed through.

Sincere thanks to local plane spotter Michael F who captured these great photos as Gladstone Airport.  And thanks to the Whitsunday Airport at Shute Harbour for allowing us to share their great video!

Photos and video taken by Michael Fleetwood and the Whitsunday Airport at Shute Harbour  ©
Posted by Damian F at 10:37 PM