On Thursday 13 April, Royal Australian Air Force (RAAF) Boeing P-8A Poseidon Maritime Surveillance Aircraft A47-002 was noted completing a missed approach at Longreach Airport.  It flew South from Townsville (where it had arrived the previous day) and looked to head to Adelaide following its airwork. 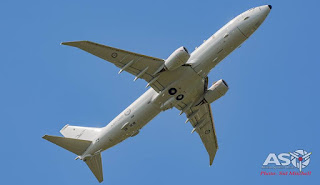 The RAAF's second P-8A Poseidon aircraft is pictured departing Darwin in late March after it was delivered to the RAAF via Amberley and then its Edinburgh base earlier in the month.

Finally, also noted visiting Longreach Airport but on Wednesday 12 April was RAAF Beech B350 Super King Air A32-346 "Hudson 04".  It looked to fly from Amberley and complete missed approaches at both Biloela / Thangool and Emerald Airports before continuing further West to Longreach Airport where it landed for a short time.  A32-346 then departed to Townsville via a missed approach at Hughenden.  While fellow RAAF Super King Air A32-437 "Dingo 05" was again noted completing airwork around the Shoalwater Bay Training Area (SWBTA) and then Yeppoon while on a flight out of and back to Townsville.

Sincere thanks to Darwin plane spotter Sid M for allowing us to share his great photo!