Over the course of this week, the Babcock Mission Critical Services Australasia (ex Australian Helicopters) Bell 412EP helicopter VH-VAU has been noted operating on its own out of Rockhampton Airport for the Capricorn Helicopter Rescue Service (CHRS) as "Rescue 300".  In fact, as these recent photos show, VH-VAU has now had CHRS titles and sponsor decals applied to its fuselage. 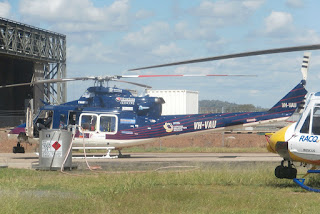 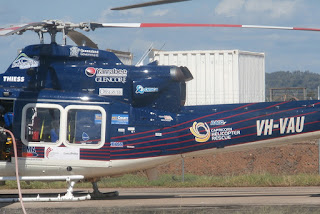 The 'usual' "Rescue 300" - fellow Babcock Mission Critical Services Australasia Bell 412EP helicopter VH-EPR - seems to be away from Rockhampton for the time being, perhaps at Coffs Harbour (New South Wales) for planned maintenance. 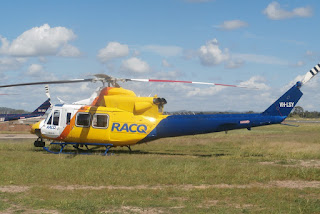 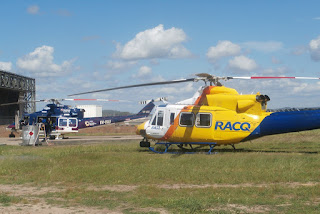 On Tuesday 25 April, VH-LSY was noted departing Rockhampton Airport for Mackay Airport where it appears to have taken up operations again with the locally-based Central Queensland Rescue Helicopter Service (CQ Rescue) as "Rescue 422".

It has also been noted that the Townsville-based Queensland Government (QGAir) Rescue Bell 412 VH-ESD "Rescue 521" has completed med-evac flights to Mackay and at Proserpine Hospitals over the course of the last couple of days.

All photos taken by Trevor Hardsman  ©
Posted by Damian F at 8:18 PM