On Tuesday 18 April, Virgin Australia Embraer E-190 VH-ZPI looked to have departed Australia for good, flying out of Brisbane for Apia (Tonga) as VOZ9901.  It has since continued to Honolulu (Hawaii), Van Nuys (California) and Nashville (Tennessee) for post-lease maintenance. 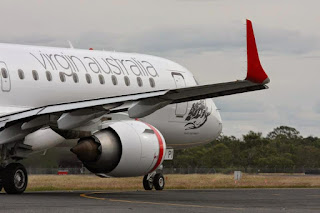 VH-ZPI was the ninth of eleven new aircraft ordered by Virgin Blue in 2006 and it was delivered to Brisbane in September 2008.  It was noted to be wearing the name 'Allie Albury'.

With the airline renamed in 2011, VH-ZPI was first noted wearing the new titles and livery of Virgin Australia in June 2014.  Of interest, it returned to service following its repaint by flying into Rockhampton Airport from Brisbane as VOZ1235.  VH-ZPI was also renamed 'Seven Mile Beach'.

VH-ZPI's final flight into Central Queensland was back on Wednesday 29 March when it operated the VOZ1707/1710 early morning rotation from Brisbane to Gladstone Airport and back.


In the meantime, VH-ZPI seemed to operate several Brisbane to Townsville flights before mostly operating out of Sydney for most of this month.