During the early part of this week, a pair of brand new 2017-build Airbus Helicopters EC135 P3 (CPDS) helicopters were unveiled at Mackay Airport for marine pilot operations with the locally-based Heli-Aust Whitsundays (Mackay Helicopters).  It appears that they have taken up the registration markings of VH-ZGH and VH-ZGP. 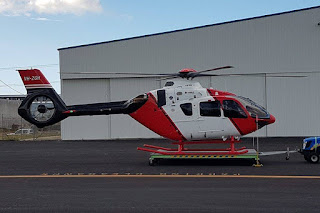 Then on Wednesday 19 April, VH-ZGH flew direct to Gladstone Airport from Mackay to provide marine pilot transfer flights and training.  It is shown above soon after arriving in the port city.

Then on Friday 21 April, VH-ZGH returned to Mackay Airport from Gladstone and in its place, Whitsunday Helicopters' Agusta A109E Power VH-KZD flew South from Mackay into Gladstone Airport. 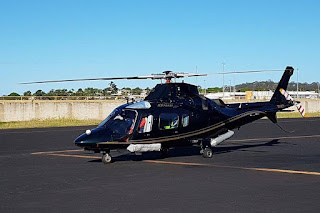 It was spotted (above) on Saturday 22 April preparing to depart on a local marine pilot transfer flight.

Of interest and as posted below, a pair of Heli-Aust Whitsundays Eurocopter EC135 P2 helicopters VH-ZGA and VH-ZGZ departed Mackay Airport just under a month ago for operations in Western Australia. 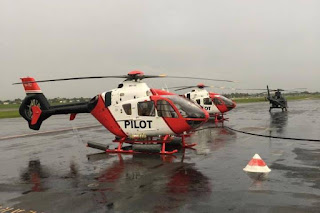