Certainly an interesting visitor into Mackay Airport on Sunday 2 April with Viking Aircraft (De Havilland) DHC-6-400 Twin Otter N153QS calling in while on a ferry flight from Cairns to Brisbane. 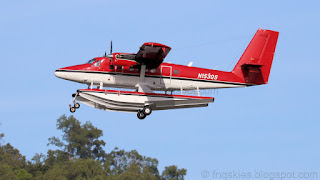 The fantastic FNQ Skies Blog has very generously shared with us this great photo as N153QS departed Cairns.  FNQ Skies also reports that N153QS has been at Cairns since early-March after arriving from overseas.