On Saturday 8 April, American registered Bombardier BD-700-1A10 Global 6000 bizjet N60XC was noted back in CQ this time touching down at Mackay Airport from Sydney. 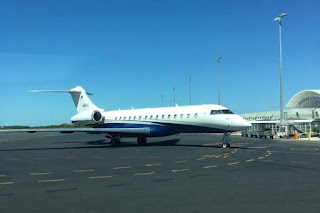 After spending the night parked on the apron (as shown), N60XC departed Mackay Airport for Townsville on Sunday 9 April.

Meanwhile, another interesting visitor on Saturday 8 April was Regional Express (REX) SAAB 340B VH-ZRK which looked to operate a charter into Mackay Airport on behalf of Pel-Air.  It arrived from and later departed back to Brisbane as PFY9388/9389.

Finally, its worth noting that on Thursday 6 April, LifeFlight (Aeromed) LearJet 45 bizjet VH-VVI completed a med-evac flight into Mackay Airport from and back to Brisbane as "Ambulance 451".

Of interest, VH-VVI "Ambulance 451" has called into Longreach Airport on Sunday 9 April, and (as mentioned below) also called into Emerald Airport very early on Saturday 8 April.