After arriving at Hamilton Island Airport during the previous week, MK Air (of Newcastle, New South Wales) Dassault Falcon 7X bizjet M-GMKM operated a flight to Mildura and back on Saturday 23 May. 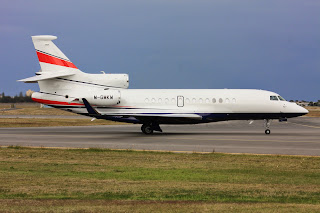 Other recent flights would suggest that Mildura is a 'base' for M-GMKM.

Also touching down at Hamilton Island on Saturday 23 May was Skypac Aviation Cessna 510 Citation Mustang bizjet VH-NEQ.  It called in from Bankstown, Cessnock and the Gold Coast.

And at the time of writing, Edwards Coaches Cessna 525 Citation CJ2 bizjet VH-RJB was due to make a visit to Hamo from Armidale and Brisbane on Sunday 24 May.  It looks to be heading back to Armidale soon after.

Finally, a corporate turbo-prop in the form of West Australia-based SOCATA TBM-850 (700N) VH-TBM also touched down at Hamilton Island Airport on Saturday 23 May from Longreach.

File photo taken by Tony Haynes  ©
Posted by Damian F at 8:00 AM