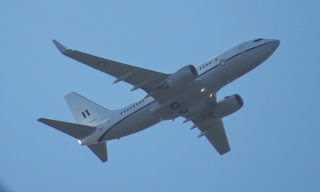 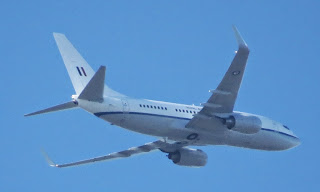 After taking off from Rockhampton Airport, A36-002 - flying again as "Envoy 29" - flew a missed approach at Rocky before it departed South to the Gold Coast and later Canberra.

As mentioned below, A36-002 called into Bundaberg and Hamilton Island on Sunday 17 May.

Thanks to Rocky plane spotter Kayanne H who captured a quick snap of the BBJ as it departed Rockhampton for the Gold Coast.

All photos taken by Kayanne Hardsman  ©
Posted by Damian F at 8:37 PM