As mentioned below, QantasLink Dash-8-Q400 Next Gen VH-LQL called into Rockhampton Airport during the morning on Wednesday 13 May.  It was the first visit of the Dash-8-Q400 which now wears a very attractive colour scheme promoting the Taronga Western Plains Zoo at Dubbo in country New South Wales.

Local plane spotters Kayanne H and Trevor H popped out to Rocky Airport capture its arrival from and departure back to Brisbane as QLK2352/2353.

As mentioned below, on its return to Brisbane, VH-LQL then operated two return flights to Emerald, with early indications that it will operate to Barcaldine and Longreach on Thursday 14 May.

It was a pretty quiet morning at Rocky on Wednesday 13 May, with only one other interesting aircraft in the form of the Queensland Government (State of Queensland) Raytheon B300 Super King Air VH-SGQ which was also parked on the Rocky Airport apron.

Earlier, Nautilus Aviation Bell 407 VH-VHU was noted departing to parts unknown after arriving and being photographed by 'IAD' on Tuesday 12 May. 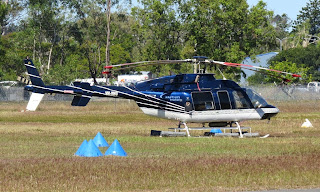 There was also continuing Runway and Taxiway surfacing works that Kayanne noted with a couple Taxiways near the apron closed, along with a section of the main Runway.

Thanks to Kayanne for sending through these great photos of VH-LQL's first visit to Rockhampton in its attractive new livery!