We posted below that Rockhampton played host to yet more interesting light General Aviation (GA) aircraft on Wednesday 6 May, however the early arrivals into Rocky were affected by a thick layer of fog that blanketed the beef capital for a portion of the morning.  As a result, at least three lighties were forced to divert to Gladstone Airport where local plane spotters Jamie and Tash were on hand to captured some great bonus arrivals!

VH-YBH flew up from the Brisbane West Wellcamp Airport early on Wednesday having arrived there from Adelaide the previous day.

Another visitor to Gladstone Airport that also diverted from Rocky early on Wednesday was the Queensland Government (State of Queensland) Raytheon B300 Super King Air VH-SGQ. 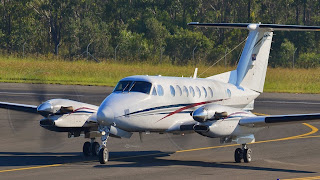 It was scheduled to fly from Brisbane to Rockhampton but interestingly, after it took on fuel at Gladstone, VH-SGQ returned to Brisbane. 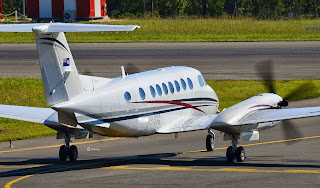