It is believed that a pair of Pilatus PC-9/A's of  the Royal Australian Air Force (RAAF) elite formation aerobatic display team - The Roulettes - have touched down at Roma Airport over the course of Thursday 28 May. 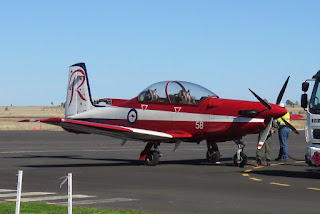 Firstly, A23-058 touched down, believed to be using the radio callsign of "Alladin 75".  It was captured taking on fuel by local plane spotter Graham M. 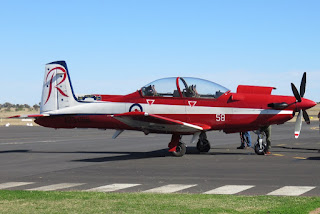 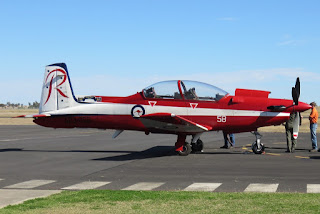 A little later in the morning another PC-9 using the radio callsign of "Alladin 77" was also heard to possibly land at Roma Airport.  This aircraft could be A23-061 which was noted flying around last week with A23-058.  Both aircraft were based at Gladstone Airport last weekend and performed solo routines at the Old Station Fly-in.

While he was at Roma Airport, Graham also captured a photo of Piper PA-31-350 VH-MJA which was visiting for the day from its Toowoomba base. 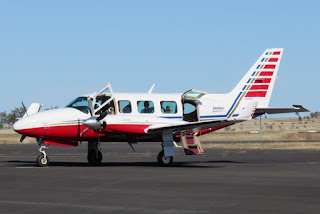 
Thanks to Graham for taking the time to capture these great photos and for sending them through to us!

All photos taken by Graham McKnight  ©
Posted by Damian F at 8:57 PM