A helicopter with an interesting history passed through Gladstone Airport on Friday 8 May and local plane spotters Jamie and Tash were on hand to capture a couple of great photos of this now brightly-coloured chopper.

Tasmanian-based Aerospatiale AS.350BA Squirrel helicopter VH-IDG was captured as it passed through Gladstone.  VH-IDG (c/n 1762) was once a part of the Royal Australian Air Force (RAAF) as a part of the Aircraft Research and Development Unit (ARDU).  It wore the military serial number of A22-007.

Its movements on Friday were not known.

There was another interstate visitor at Gladstone Airport on Friday 8 May that was captured by Jamie and Tash in the form of Shepparton (Victoria) Cirrus SR22 VH-YKR.  Again its exact movements are not known. 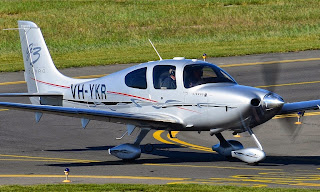 Some great photos from Jamie and Tash in Gladstone, and we thank them sincerely for capturing and for sending through these photos!