Eurocopter AS350.B helicopter P2-PAL was noted departing Hamilton Island Airport early on Wednesday 13 May.  It looked to depart to Cairns where it was later noted departing further North to Coen. 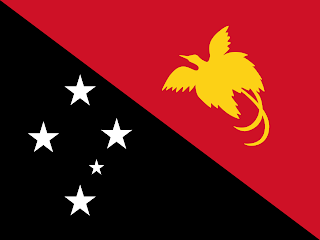 I presume this recently registered chopper was on a delivery flight to Papua New Guinea (PNG).

UPDATE!  After doing some research, I've discovered that P2-PAL is indeed a Eurocopter AS350.B (c/n 1724) and was only placed on the PNG Aircraft register in the last week or so.  It is showing as registered to Pacific Air of Port Moresby.

Prior to this, it wore the Australian registration of VH-ELP and was operated by Rotor-Lift in Tasmania.  And in a previous 'life' VH-ELP was once operated in South Australia as a Westpac Life Saver Rescue Helicopter.


I do really enjoy making discoveries like this!  Plane spotting is such an enjoyable hobby and tracking the histories of various aircraft and helicopters is always an interesting part!
Posted by Damian F at 9:23 PM

Email ThisBlogThis!Share to TwitterShare to FacebookShare to Pinterest
Labels: Aerospatiale, Hamilton Is