Over the last few days and over the weekend, members of the Callide Dawson Flying Group (CDFG) met up for a 'Hangar Chat' at Bauhinia Park, Theodore.  Here is a report: 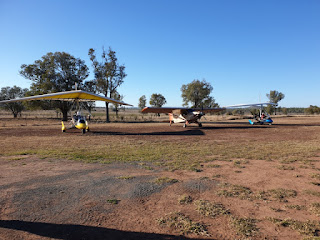 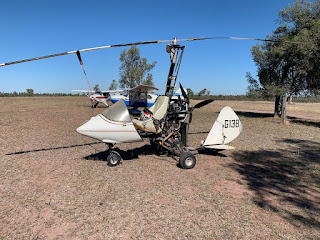 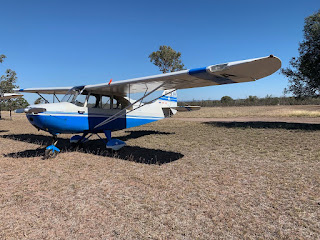 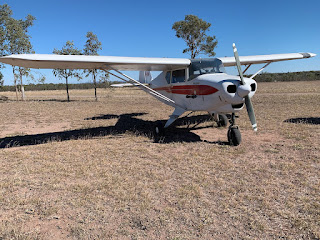 Friday morning...  Tony DeGit in his 912 Airborne Trike flew in and landed not long after Janelle had arrived with their caravan to stay for the weekend.
Saturday morning...  Ross Morrish in his Gyro landed, tied down and no sooner said 'good-day' to everyone than it was eyes up again as we heard Rasso and the lovely VH-LIA (Aeronca Champion) inbound.
VH-LIA safely tied down and the first round of cuppas and consuming of the delicious cornflake biscuits and pumpkin fruitcake (loving baked by Janelle DeGit) as we filled in time until Al Wilson arrived shortly after in his PIPER COLT.  More cuppas.....more bickies and cake, then I made up a batch of scones which quickly disappeared (all bar one lonely scone left behind) along with the last of the plum jam.
The northern verandah was the place to be, in the sun and out of the (just a little bit cold) slight breeze that was hanging about. Much laughter, chatting and generally catching up was done as well as some tweaking with Ross's gyro prop out in the hangar. Lunch was followed by Ross and Dave See doing a fly down to visit Arthur Edwards. Al, Rasso and Ross headed home at various times during the afternoon and each reported back when they were safely home.
Tony (Trike), Dave (Lightwing) and David Jewell (Airborne Trike 912) enjoyed quite a bit of local flying during the weekend and we had a visit from Stew Shoecraft on Saturday night.
David Jewell's dad, John and his friend Lynn arrived from Toowoomba on Sunday afternoon and each went for flights with the 2 Dave's which topped off a really lovely weekend at Bauhinia Park. This month the Jewell family celebrate 60 years since taking ownership of their first property 'LOMA' (which boundaries Bauhinia Park) in the Theodore district.
Attached below are some pictures of the various aircraft mentioned above...
Take care everyone....
Posted by Damian F at 10:30 AM

Email ThisBlogThis!Share to TwitterShare to FacebookShare to Pinterest
Labels: CDFG