On Thursday 25 July, three United States Army (US Army) Sikorsky UH-60L Blackhawk helicopters of the 1st Battalion 52nd Aviation Regiment were spotted in the skies over Rockhampton flying down to the Gladstone Port.  They were heard to be flying as "Dustoff 46 Flight" and looked to earlier depart the Shoalwater Bay Training Area (SWBTA) before being noted visiting Camp Rocky - the Australian Army Defence Support Unit (DSU) camp adjacent to Rockhampton Airport. 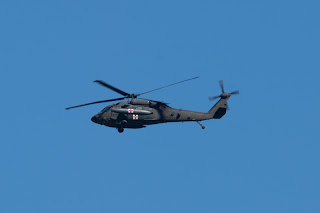 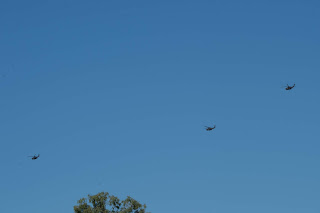 The three Blackhawks join (possibly) five US Army Boeing AH-64E Apache helicopters of the 1st Battalion 229th Aviation Regiment at the Gladstone Port which flew down also from Shoalwater Bay the previous day.  It is expected they will be loaded and shipped out home to the United States of America as early as this weekend.

All photos taken by Scott Harris  ©
Posted by Damian F at 8:47 PM