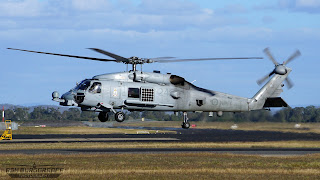 It looked to fly in from parts unknown to the East and was heard to be using the radio callsign of "Tiger 24”.

A short time later, N48-024 departed the Rockhampton area for the East.

It is believed that N48-024 - seemingly of the RAN's 816 Squadron - is off a Royal Australian Navy ship with as many as three believed to be in waters off the Central Queensland coast during Exercise Talisman Sabre 2019 (TS19).