On Friday 19 July, local plane spotter Daniel B was on hand to capture a couple of quick photos of US Army Sikorsky UH-60M Blackhawk helicopter (**-)20401 of the 2nd Battalion 158th Aviation Regiment 'Warhawks' resting quietly at Rockhampton Airport.  It had earlier flown in from the Shoalwater Bay Training Area (SWBTA) as "Bigfoot 01". 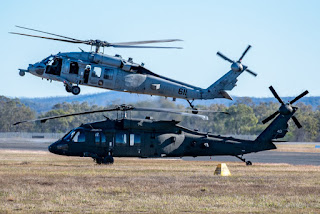 The Blackhawk later reportedly completed a quick hop across to 'Camp Rocky' - the Australian Army Defence Support Unit (DSU) camp adjacent to Rockhampton Airport - before then returning to Shoalwater Bay.

Finally, also on Friday 19 July, and every other day this week, some of the United States Army (US Army) (US Army Reserve Command) Beech C-12V Huron (Beech B200 King Air) aircraft continue to come and go at Rockhampton Airport.

These Huron aircraft have been quite busy over the Exercise, completing many trips between Brisbane, Rockhampton and Townsville - where they appear to be based during Exercise Talisman Sabre 2019 (TS19).