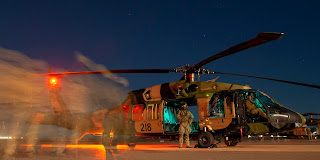 It appears that they departed Townsville and called into Mackay Airport before arriving into Rockhampton Airport.  They were heard to be using the radio callsigns "Nemesis 71", "Disco 71" and "Disco 72".

After departing Rockhampton Airport, it is believed they called into Bundaberg Airport.  One Blackhawk had a change of callsign to "Disco 203" - possibly making it A25-203 - and was heard to depart Bundy for the Oakey Army Aviation Centre.

All three Blackhawks are believed to be flown by the Australian Army's 171st Aviation Squadron (forming part of the 6th Aviation Regiment) based at Holsworthy Barracks near Sydney.

Australian Army Blackhawk A25-218 is pictured above preparing to have United States Navy (US Navy) SEALs board the helicopter at RAAF Base Townsville before a night mission during Exercise Talisman Sabre 2019 (TS19).