Also noted arriving into Rockhampton Airport during the late afternoon on Monday 29 July was United States Marine Corps (USMC) Lockheed KC-130J Hercules 169227 (Tail Code QD-9227).  It looked to arrive from the North and was heard to be using the radio callsign of "Sumo 52". 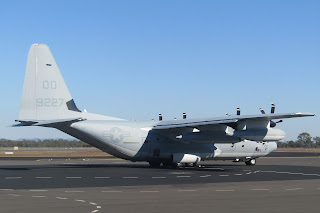 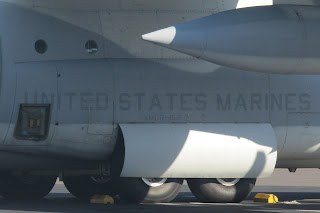 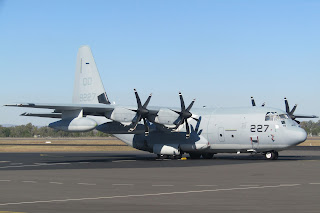 The KC-130J remained parked for the night and was photographed still sitting at Rockhampton Airport on Tuesday 30 July.

And as this post is being written, it appears that 169227 / QD-9227 is staying at Rockhampton Airport for another night.

Of interest, the Herc is flown by the Marine Aerial Refueller Transport Squadron 152 (VMGR-152) the "Sumos" and is one of a handful that have operated in the region in support of joint Military Exercise Talisman Sabre 2019 (TS19).