Rounding off a spectacular day of plane spotting on Saturday 27 July, Royal Australian Air Force (RAAF) Boeing C-17A Globemaster III A41-208 was photographed arriving into Rockhampton Airport during the late afternoon after flying up from RAAF Base Amberley. 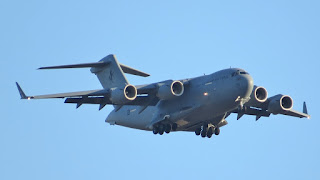 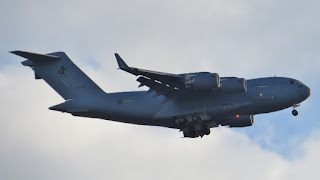 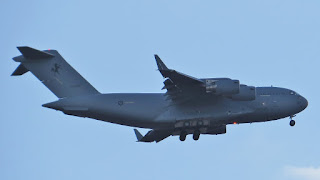 It was heard to be using the radio callsign of "Stallion 21".

After a short time on the ground, A41-208 "Stallion 21" then departed Rockhampton Airport and flew all the way down to Hobart in Tasmania.

Earlier in the day, A41-207 as "Stallion 73" was noted flying into Williamson Airfield within the Shoalwater Bay Training Area (SWBTA) from Amberley.  It later departed West, possibly to Darwin.

While during the afternoon, A41-206 as "Stallion 05" was noted flying up from Amberley at low level to around Gayndah and Bundaberg before completing a missed approach at Bundaberg Airport.  It then looked to return to Amberley.

Finally, it's worth mentioning that also on Saturday 27 July,  RAAF Lockheed C-130J-30 Hercules transport aircraft A97-467 popped into Rockhampton Airport for a short time as "Trojan 24".  It possibly arrived from the South and departed to Darwin.  While RAAF Airbus A330-200 / KC-30A Multi Role Tanker Transport (MRTT) A39-005 as "Dragon 35" was noted arriving into Rockhampton Airport from Amberley before it later departed to Melbourne (Tullamarine).

Sincere thanks to local plane spotter Kayanne H for being at the right place and the right time and allowing us to share these great photos!

All photos taken by Kayanne Hardsman  ©
Posted by Damian F at 9:55 PM