Over the previous couple of evenings, elements of the Australian Defence Force (ADF) and United States Armed Forces have been noted calling into Bundaberg Airport as joint Military Exercise Talisman Sabre 2019 (TS19) came to the Fraser Coast.  And late on Sunday 14 July, the action at Bundy wrapped up in spectacular fashion with multiple visits by US Marines KC-130J Hercules transport aircraft, as well as a visit by a massive RAAF C-17 Globemaster. 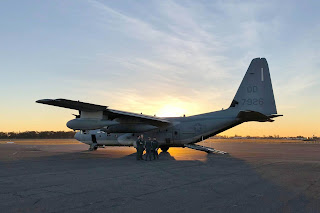 It was soon joined by fellow USMC Lockheed KC-130J Hercules 169532 (Tail Code QD-9532) "Sumo 97" with both photographed parked on the Bundaberg Airport apron. 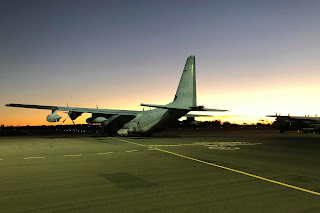 Meanwhile, it is believed that yet again on Sunday 14 July, up to four United States Marine Corps (USMC) Bell Boeing MV-22B Osprey tiltrotor aircraft landed on the grass Runway at Bundaberg Airport after flying down from Townsville using the one radio callsign of "Skytrain 11" . 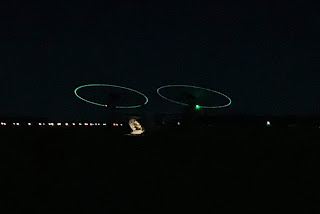 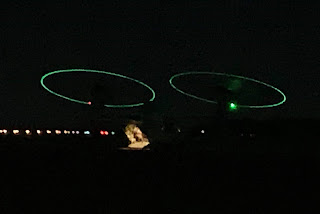 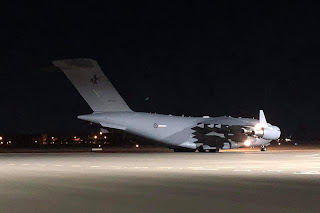 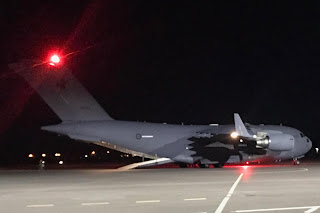 It looked to arrive from RAAF Base Amberley and later depart to Williamson Airfield within the Shoalwater Bay Training Area (SWBTA).  A41-213 later returned to Amberley.  It was heard to be using the radio callsign of "Stallion 26".

It is believed that fellow RAAF RAAF) Lockheed C-130J-30 Hercules transport aircraft A97-467 "Trojan 03" may have also called into Bundaberg Airport also on Sunday 14 July.

Of interest, it is also believed that A97-467, also as "Trojan 03", was completing parachute drops at or around Mackay Airport well after dark on Saturday 13 July.  It could have been doing the same on Sunday night.

Photos taken by Isaac S and Adam James Deem  ©
Posted by Damian F at 6:30 AM