Also on Monday 15 July, United States Army (US Army) Sikorsky UH-60L Blackhawk helicopter (90-)26283, of the 1st Battalion 52nd Aviation Regiment, was photographed departing Rockhampton Airport.  It had earlier arrived from Shoalwater Bay and was heard to be using the radio callsign of "Dustoff 08". 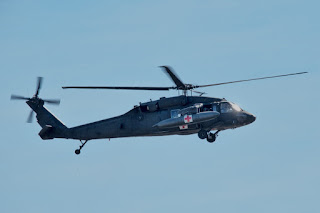 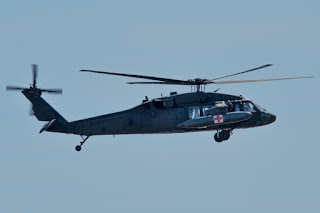 It appears the medical evacuation equipped Blackhawk helicopter then completed a flight around the Rockhampton Base Hospital before it then returned to the Shoalwater Bay Training Area (SWBTA).

Meanwhile, earlier on Monday 15 July, it appeared that a pair of US Army Sikorsky UH-60M Blackhawk helicopters also called into Rockhampton Airport, also arriving from Shoalwater Bay.  The unidentified Blackhawks were later noted returning to the Bay.

All photos taken by Scott Harris  ©
Posted by Damian F at 7:27 PM