I spent this last weekend at Mackay for cricket and popped into Mackay Airport briefly during the afternoon on Friday 6 November and was surprised to capture New Zealand-based Piper PA-24-250 Comanche ZK-BAZ which was parked in front of the Mackay Aero Club. 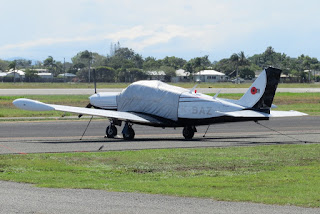 I've read that ZK-BAZ has also been noted at several other Airports around the East Coast of Australia and it is the second time that it has been noted in CQ in the last year or so.  ZK-BAZ appeared to depart Mackay on Saturday 7 November to parts unknown. I have since noted that on Wednesday 11 November, ZK-BAZ departed back to New Zealand, departing Australia via Coffs Harbour.

It is interesting to note that the Comanche wears a decal featuring a stylised 'ANZAC' poppy with the accompanying label "New Zealand WW100" and underneath this "Wings to Gallipoli ANZAC 2015". Perhaps the aircraft and owner made the journey to Turkey to commemorate the Centenary of the ANZAC Landings on the Gallipoli Peninsular.

Also spotted at Mackay on Friday 6 November was Amateur-built Van's RV-7 VH-CDT which is based in Victoria. 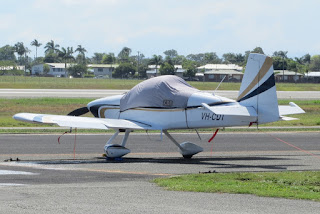 And joining them out front of the Mackay Aero Club were the Club's own Piper PA-28-161 Warrior VH-PCN and very much derelict Mooney M20F VH-ERK. 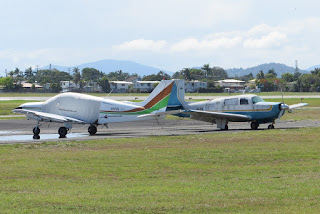 One recent - and striking looking - acquisition for locally-based Horizon Airways (the registered operator shown a Cowley Air of Mackay) is Gippsaero GA-8 Airvan VH-OHN. It wears titles and colours of the Mackay Grand Suites accommodation house in the centre of the city. 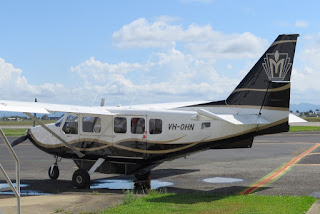 Around on the Southern section of General Aviation (GA) Apron were a nice selection of light GA aircraft, mostly parked outside of the Chrisair Aircraft Maintenance hangar. 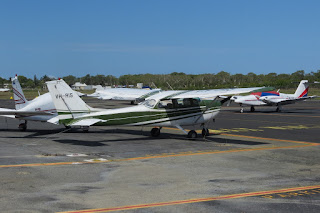 Specially spotted on the GA Apron were Cessna 172 VH-KOE from Moranbah. 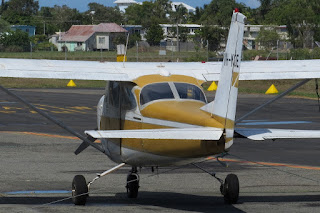 Also Cessna 206 VH-TOC was spotted visiting. This Cessna made National News headlines in May when it made an emergency landing near Rockhampton while on a trip from the Northern Territory to Rockhampton Airport carrying participants for Beef Week 2015. 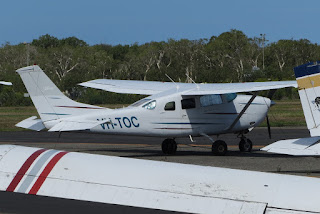 Finally, locally-based Embraer EMB-550 Legacy 500 bizjet N142GZ has been quite busy over recent weeks with it noted departing North from Mackay to Townsville very early on Saturday 7 November.  I then noticed that it returned to Mackay late on Sunday 8 November.

In the days since, N142GZ operated to Brisbane from Mackay on Monday 9 November and on Wednesday 11 November, it returned to Mackay and then returned South to Brisbane.

A nice visit to Mackay Airport!
Posted by Damian F at 8:01 PM