More Photos of Volga-Dnepr Antonov AN-124-100 RA-82047 at Rockhampton Airport Thursday - And it will Return Saturday!

As this post is being written, Volga-Dnepr Antonov AN-124-100 RA-82047 is heading back to Rockhampton Airport on Saturday 28 November as VDA1495 from Johor Bahru in Malaysia.  It is expected to touch down until the early evening - not in the early morning as first reported. 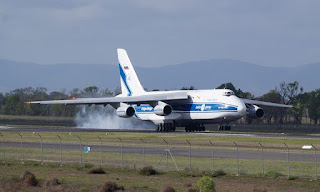 Meanwhile, as posted below, RA-82047 initially arrived into Rocky on Thursday 26 November from Cairns.  Local plane spotter Ash B was also on hand at Rockhampton Airport and has sent through these great photos as the massive Russian freighter touched down and taxied to its parking spot on Gate 6 at the Southern end of the apron. 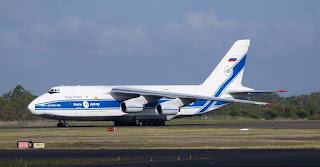 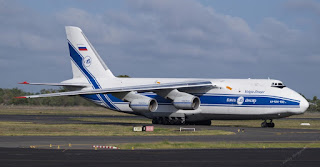 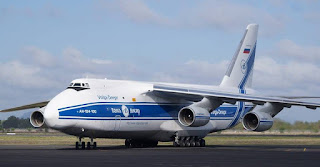 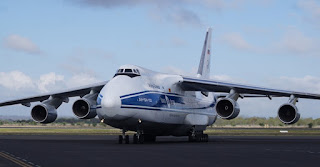 After loading the five Republic of Singapore Air Force (RSAF) Boeing AH-64D Apache helicopters, the Antonov eventually departed Rockhampton for Darwin later on Thursday 26 November, touching down in the top end just after midnight.  It then departed onward to Paya Lebar Air Base in Singapore, touching down early on Friday 27 November.

Sincere thanks to Ash for taking the time to capture and send through these great photos!

All photos taken by Ash Burggraaff  ©
Posted by Damian F at 11:22 AM