Making a surprise arrival in Hervey Bay (Fraser Coast) Airport early on Thursday 19 November was General Aviation Maintenance (GAM) Dornier DO 228-202 VH-VJE.  It touched down from Brisbane and Theodore. 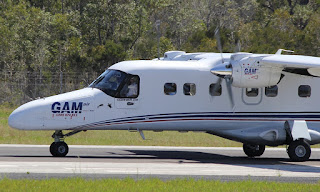 In the early afternoon, VH-VJE departed back to Brisbane but not before it appeared to conduct a scenic flight and/or airwork over nearby Fraser Island before heading South. 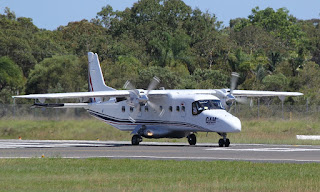 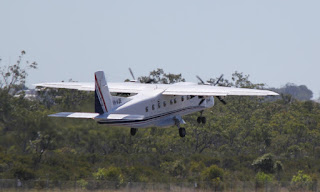 Until recently, VH-VJE was one of three Dorners that GAM had based at Brisbane for use on Fly-in Fly-out (FIFO) charter flights to Chinchilla - a contract that has now been taken over by Skytrans Airlines - see Blog Post below.

Of interest, information suggests that VH-VJE completed a couple of flights from Brisbane to Lord Howe Island over the last week.

GAM is based at Melbourne's Essendon Airport and comprises GAMair, General Aviation Maintenance (GAM), DC-3 Australia, Commander Air and Reefwatch Air Tours.  GAM predominantly operates a fleet of Aero Commanders and Shrike Commanders along with the Dornier DO 228 aircraft.  GAM also operates several freight flights out of Brisbane Airport with one of their Aero Commanders operating each weekday morning from the capital to Bundaberg, Maryborough and Munduberra and then back during the evening.

Sincere thanks to Hervey Bay plane spotter Ben M for allowing us to share his great photos of VH-VJE!