Great to see that Light Jets Australia Cessna 525 Citation CJ1 VH-TFW has been back in Central Queensland this week with the sleek little bizjet initally calling into Biloela / Thangool Airport from its Archerfield base on Tuesday 10 November. 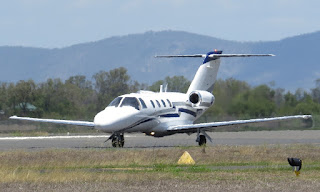 Then on Wednesday 11 November, local plane spotter Kayanne H captured a couple of photos as VH-TFW made the short hop across from Thangool to Rockhampton Airport where it was due to stay for the night. 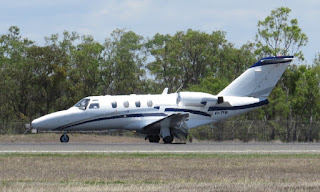 On Thursday 12 November, VH-TFW departed Rockhampton for Archerfield and Toowoomba.  It was then interesting to note that it has since returned to Rocky where it again looks to be spending the night parked.

All photos taken by Kayanne Hardsman ©
Posted by Damian F at 8:56 PM