Col was on the spot at Gladstone Airport on Saturday 21 November when Capricorn Helicopter Rescue Service (CHRS) Bell 412 VH-LSY called in for fuel following what was believed to be a training flight around the Gladstone area. The big Bell is operated by Australian Helicopters for the CHRS and is based at Rockhampton Airport. 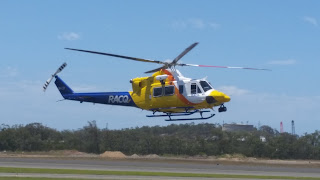 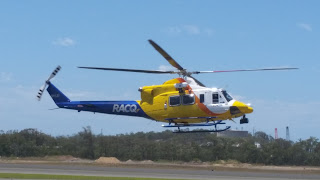 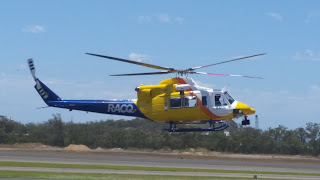 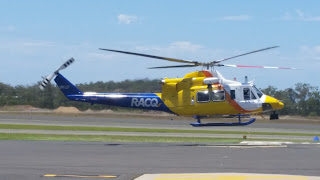 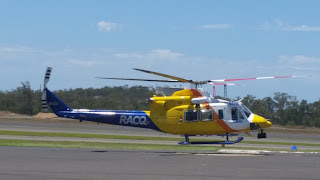 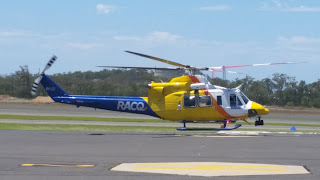 Since 2013, Australian Helicopters has been the chosen provider of three Bell 412 helicopters in support of  the CHRS along with the Mackay Airport-based Central Queensland Rescue Helicopter Service (CQ Rescue).  Bell 412 VH-LSY is considered to be an 'operational spare' for the main Bell 412EP choppers VH-EPR (CHRS) and VH-CQJ (CQ Rescue)

Each rescue helicopter can be configured to accommodate five crew and a single stretcher or three crew and two stretchers in the cabin, along with a passenger or additional crew member up front next to the pilot.

Role equipment on board the helicopters include a variable speed rescue winch with a 250ft long cable, capable of supporting a two person operation (or up to 270 kg).  They also have a cargo hook with fire fighting bucket capability, night search light and night vision device and a homing beacon.

The RACQ / Capricorn Helicopter Rescue Service (CHRS) was incorporated in December 1995 and commenced operations a short time later in January 1996.  It provides a 24 hours a day / 365 days a year aero-medical and rapid rescue response service that is free of charge, and operates under a five year rolling contract agreement with the Queensland Government (Queensland Health Department).

Whether in the bush, at sea or a distant mine site, the CHRS is able to despatch medical or rescue teams to those in need of rapid assistance, as well as provide an airborne intensive care unit to transfer critically injured or ill patients to a more appropriate medical facility, or even conduct a search and rescue mission.

To operate the CHRS, 40% of required funding comes from the Queensland Government while the remaining 60% is funded through donations and proceeds from the public. Needless to say, the CHRS deeply appreciates all fundraising efforts and extremely appreciative of the donations from the Creed family after holding the annual Old Station Fly-In at Raglan, along with fundraising efforts in association with the recent Rescue Chopper Day.

To learn more about the RACQ / Capricorn Helicopter Rescue Service (CHRS), or do make a donation ans support this vital rescue service, visit their official page at:  http://chrs.org.au/