With the Singapore Armed Force's Exercise Wallaby 2015 coming to a close, the final 'wave' of heavy jet troop charters into Rockhampton Airport in support of the Exercise commenced late on Tuesday 24 November with a pair of Air New Zealand wide-bodies touching down. 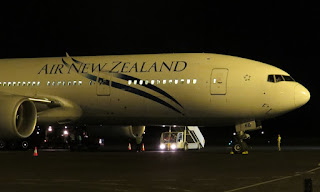 Air New Zealand Boeing B777-200 ZK-OKB was first to arrive, positioning 'across the ditich' directly from Auckland as ANZ6009.

After taking on a full load of personnel and cargo, ZK-OKB departed to Singapore's Changi Airport as ANZ1951. 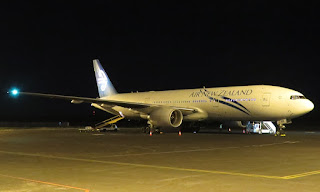 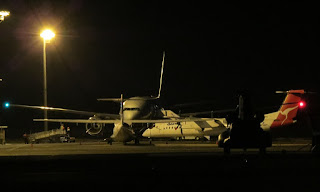 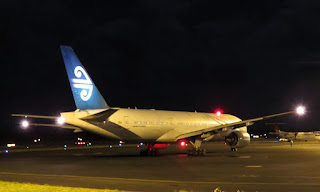 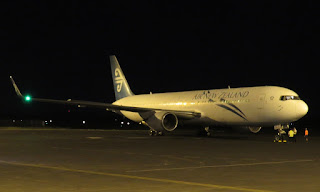 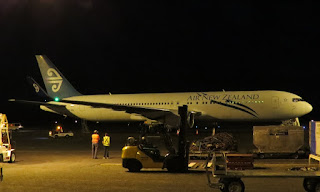 In the early hours of Wednesday 25 November, ZK-NCL also departed to Changi Airport but as ANZ1955.

At the time of writing, it is expected that both ZK-OKB and ZK-NCL will call back into Rockhampton Airport later on Wednesday 25 November with ZK-OKB possibly calling back before sunset at around 4.30pm.

And finally, it is expected that (as mentioned below) Volga Dnepr Antonov AN-124 RA-82047 (which is currently parked at Cairns Airport) will touch down at Rockhampton Airport in the early hours (5.00am) of Thursday 26 November (and again on Saturday 28 November) to take the two RSAF Boeing CH-47SD Chinook and five RSAF Boeing AH-46D Apache helicopters home to Singapore.

Sincere thanks to local plane spotters Kayanne H and 'IAD' who ventured out to Rockhampton Airport late on Tuesday to capture and share these great photos!

Photos taken by the Kayanne Hardsman and 'IAD'   ©
Posted by Damian F at 8:00 AM