Gladstone plane spotter Michael F was in Rockhampton last week and enjoyed some time - in between important family commitments - to take in some of the action at Rockhampton Airport as the Singapore Armed Force's Exercise Wallaby 2015 continued. 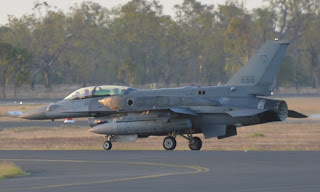 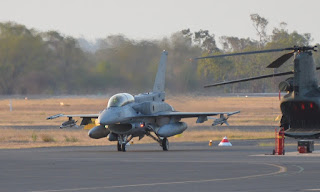 On Thursday 29 October he was at Rockhampton Airport as Republic of Singapore Air Force (RSAF) General Dynamics (Lockheed Martin) F-16D Block 52 Version Fighting Falcon jets '666' and '667' took to the air on a spectacular evening sortie to the Shoalwater Bay Training Area (SWBTA).

Sincere thanks to Michael for taking the time to capture and send through these awesome photos!

As you read this, the F-16s are scheduled to enjoy one final day of flying on Thursday 5 November with a departure from Rockhampton to RAAF Base Tindal in the Northern Territory early on Monday 9 November.  There are reports that Tindal is currently playing host to four RSAF McDonnell Douglas (now Boeing) F-15SG Strike Eagle fighter jets currently on Exercise and the six F-16s from Rocky are due to join them next week.

All photos taken by Michael Fleetwood  ©
Posted by Damian F at 9:32 PM