And a Trio of RAAF King Airs Around CQ Airports and Airspace Late on Monday Afternoon! 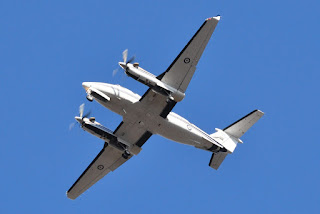 I had the nice surprise of capturing a couple of photos of RAAF Super King Air A32-348 flying as "Hudson 32" as it performed a couple of low passes overhead Clermont Aerodrome. 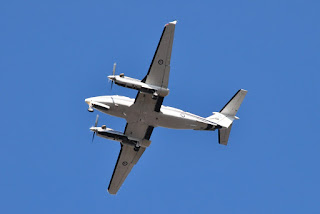 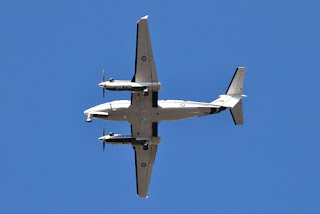 This aircraft is operated by the RAAF's 32 Squadron based at East Sale in Victoria.

Also from 32 Squadron was fellow RAAF Super King Air A32-349 flying as "Hudson 49" was noted to overfly Thangool / Biloela before it was then noted flying at low level off Mackay - possibly Keswick Island.

UPDATE! Of interest, A32-349 was then noted on Tuesday 24 November flying as "Hudson 29" on a flight from Townsville via airwork at Hamilton Island, Rockhampton, Emerald and Mackay before eventually returning to Townsville.

Finally, RAAF Super King Air A32-671 flying as "Dingo 44" overflew Clermont as high levels while on the a flight from the South to Townsville. This Super King is operated by the RAAF's 38 Squadron out of Townsville.
Posted by Damian F at 7:07 PM