Again this is not strictly a post about plane spotting in Central Queensland, but another historic and notable aircraft has rolled out of the Flying Colours paintshop at Townsville Airport, this time on Sunday 22 November. 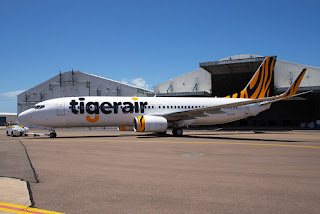 The first of three Virgin Australia Boeing B737-800s that are being transferred to Tigerair (Tiger Airways) Australia to begin international services to Bali next year has emerged from the paintshop looking resplendent in the titles and colours of its new operator.  Local plane spotter Dave was on hand to capture some beauty photos as VH-VUB was towed out of the Flying Colours Paintshop on Sunday morning ahead of flying on to Melbourne (Tullamarine) Airport later in the day. 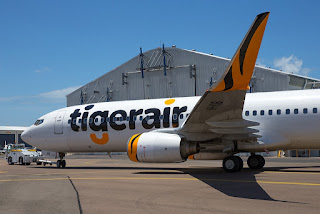 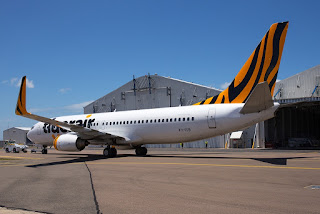 The three B737-800s are being transferred from Virgin's mainline fleet to its now wholly-owned low-cost unit Tigerair to take over the Adelaide-Bali, Melbourne-Bali and Perth-Bali routes from late March next year.  They will remain on the Virgin Australia International Airlines air operator’s certificate and will be flown by Virgin pilots alongside Tigerair cabin crew. They are due to be reconfigured into a one-class layout with 180 seats.

Sincere thanks to Dave for taking the time to capture and share his lovely photos with us!