'Up the road' at Mackay and Poserpine (Whitsunday Coast) Airports, there have also been a couple of interesting visitors this week.  On Monday 13 July, and as mentioned below, Earth Commodities Cessna 550 Citation Bravo bizjet VH-CCJ called in for part of the day from Gladstone.


Also calling in from Gladstone on Monday was Air Charter CQ / Australia by Seaplane DHC-2 Beaver VH-IDO which I presume is undergoing maintenance while in Mackay. 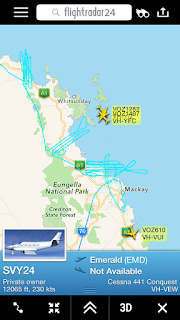 On Tuesday 14 July, South Australia-based Piper PA-32RT-300T VH-CGN touched down from Longreach.  It departed to Rockhampton on Thursday 16 July.

Up at Proserpine / Whitsunday Coast Airport, a couple more interesting light General Aviation (GA) aircraft were noted calling in with a couple of Cessna 208 Caravans of Australia Skydive (Skydive the Beach Group) heading North and South last Sunday 12 July.  VH-DVS was noted heading North to Cairns from Tyagarah via Prosie, while VH-ZMV flew South from Cairns to Tyagarah via Prosie.

And on Monday 13 July, Avcair (Sutherland Aviation) Raytheon B300 Super King Air VH-WXC visited Proserpine for part of the day.
Posted by Damian F at 9:50 PM