Local plane spotters 'IAD' and Kayanne H ventured to Rockhampton Airport on Monday 13 July and both captured some more great photos of more of the military aircraft action as Exercise Hamel and joint Military Exercise Talisman Sabre 2015 both continue. 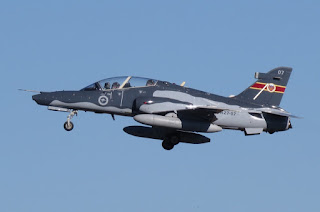 Early on Monday, 'IAD' captured a couple of great photos as Royal Australian Air Force (RAAF) British Aerospace (BAe) Hawk 127 jet training aircraft A27-07 and A27-17 departed together as "Puma". 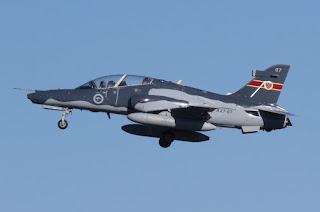 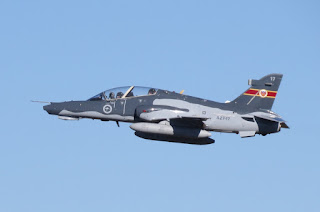 It's worth noting that the Hawks were seen and heard departing on at least three other sorties on Monday with one pair heard using the "Leopard" radio callsign. 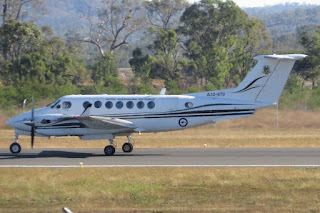 A32-673 eventually departed to RAAF Base Amberley while A32-670 departed back to Townsville via a practice ILS approach at Gladstone Airport!  That was a surprise!

The other Super King Air to call in was A32-426, and it called in from RAAF Base Tindal, near Katherine in the Northern Territory.  It was heard to be using the unusual radio callsign of "Blackduck 7". 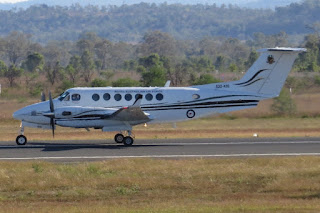 RAAF Lockeed C-130J-30 Hercules transport aircraft A97-467 was again heard flying from the South into the Shoalwater Bay Training Area, although this time it was using the radio callsign of "Odyssey 40".

Another Hercules - Lockheed C-130H NZ7003 of the Royal New Zealand Air Force (RNZAF) was also heard flying in Shoalwater Bay - and was even noted completing a 'touch-and-go' on Runway 32 at Mackay Airport!

Sincere thanks again to 'IAD' and Kayanne for taking the time to capture and send through their awesome photos from Rockhampton Airport!

Photos taken by 'IAD' and Kayanne Hardsman  ©
Posted by Damian F at 8:21 PM