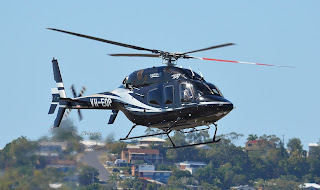 On Sunday 12 July a couple of nice helicopters passed through Gladstone Airport including Corporate Aviation Bell 429 Helicopter VH-EQP which was returning South from Hamilton Island to its Southport base on the Gold Coast.

Local plane spotters Jamie and Tash were on hand to capture some great photos of VH-EQP on Sunday, and, on Monday 6 July when it flew North to Hamo, again from Southport, and again via a fuel stop at Gladstone. 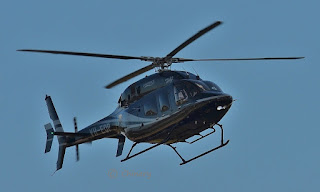 It appears that VH-XCK has flown to Gladstone to provide 'cover' for the locally-based Careflight Bell 412EP VH-XCY which has departed to Archerfield late on Sunday 12 July. 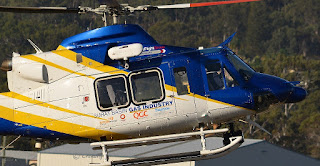 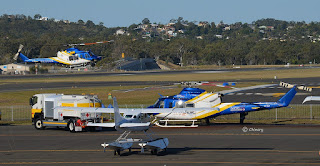 It was also interesting to note - as posted below - that VH-XCY operated a med-evac flight to Rockhampton a earlier in the afternoon, before it returned to Gladstone and then departed to Archerfield.

Also of interest, Careflight Bell 412 VH-XCN made a surprise visit to Hervey Bay during the morning of Saturday 11 July from its new base at Brisbane Airport. Flying as "Rescue 533", VH-XCN looked to depart directly to the Royal Brisbane Hospital Heliport, completing a med-evac flight.

Finally, a helicopter that is a long way from home - MicroFlite Helicopters Eurcopter EC120B VH-JBY - which is normally based at Melbourne's Moorabbin Airport - passed through Gladstone Airport heading North on Thursday 9 July.

VH-JBY has since been spotted flying around Townsville over this weekend, so I presume that it was up there for the weekend's V8 Supercar Racing Round in Townsville.  UPDATE!  On Monday 13 July, VH-JBY was noted returning South from Townsville via Mackay and Gladstone Airports, presumably returning home to Moorabbin.

Sincere thanks to local plane spotters Jamie and Tash for taking the time to capture and send through these awesome photos!