Mackay locals have told me that most evenings, a thick sea fog has rolled over the city, reducing viability and causing some freight flights to hold or divert.  Well on Saturday 25 July, this sea fog rolled in a little earlier during the late afternoon causing three inbound flight to divert or return to Brisbane.

QantasLink Dash-8-Q400 VH-QOP was operating as QLK2512 and diverted to Townsville, while Jetstar Airways Airbus A320 VH-JQG and Virgin Australia Embraer E-190 VH-ZPA were both enroute to Mackay and turned back to Brisbane.

There were no arrivals or departures at Mackay Airport until mid-morning on Sunday 26 July.

I actually touched down back at Mackay on Sunday 26 July around midday on QantasLink Dash-8-Q400 Next Gen VH-LQL on board QLK2512. 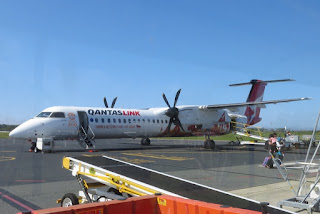 As we approached Mackay, the sea fog was still hanging around the Harbour! 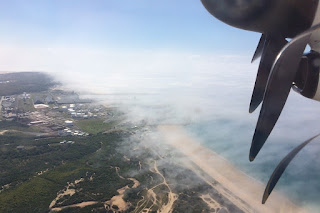 I do believe there was an additional QantasLink flight on Sunday morning, and I suspect Virgin substituted the larger Boeing B737-800 onto their morning and lunchtime services on Sunday.
Posted by Damian F at 9:24 PM