Also popping into Rockhampton Airport late on Thursday 13 July, was a pair Royal Australian Air Force (RAAF) Canadair CL-600-2B16 Challenger 604 bizjets which are both flown by the RAAF's VIP 34 Squadron out of Canberra. 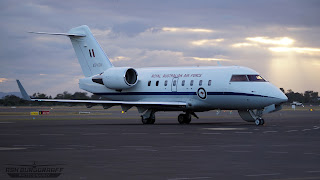 Of interest, A37-001 also visited Rockhampton Airport on Wednesday 12 July, arriving from the South and departing to Townsville.

UPDATE!  Late on Friday 14 July, A37-003 returned to Rockhampton Airport from Darwin again as "Regent 25"  It later departed to Canberra.

Sincere thanks to local photographer Ash Burggraaff for allowing us to share his great photo!  Be sure to check his growing body of work on his Flickr page featuring many more images from Talisman Saber 2017 (TS17) - https://www.flickr.com/photos/124156252@N03/
Posted by Damian F at 10:53 PM