It appears that some of the aircraft and helicopters deployed to Rockhampton Airport for joint Military Exercise Talisman Saber 2017 (TS17) are starting to return to their 'home' bases given that the Exercise is due to wrap up in the next few days.

On Tuesday 18 July, Royal Australian Navy (RAN) Bell 429 'Global Ranger' helicopter N49-049(049) was noted departing Rockhampton Airport for the South and was later noted departing Hervey Bay (Fraser Coast) Airport where it appears to have called in for fuel.  It was also noted at the Gold Coast a little later in the day. 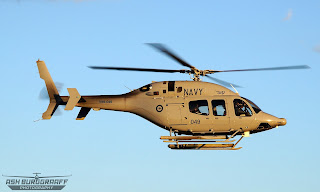 Since arriving into Rocky just over a week ago, N49-049 has completed daily flights from Rockhampton Airport into the Shoalwater Bay Training Area (SWBTA) and back.  On all of its flights, it was heard to be using the radio callsign of "Medusa 49".

Meanwhile, mostly during daylight hours, several other Australian Defence Force (ADF) helicopters - along with the occasional overseas defence force chopper - have been noted calling into Rockhampton Airport and the nearby 'Camp Rocky'.

While unidentified Australian Army NH Industries MRH-90 Multi-Role Helicopters have been heard calling into both Rockhampton Airport and Camp Rocky as "Destrier 11", "Destrier 12" and "Destier 21".

Finally, over the last couple of days, the Royal New Zealand Navy (RNZN) Kaman SH-2G(I) Super Seasprite NZ3618 has been noted visiting Rockhampton Airport once again.  It has been heard using the radio callsign of "Seasprite 18". 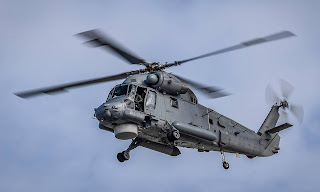 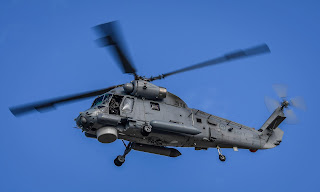 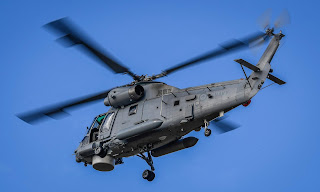 As mentioned previously, the Seasprite helicopters of the New Zealand Navy are provided by No. 6 Squadron of the Royal New Zealand Air Force (RNZAF).  The Squadron is equipped with a fleet of four SH-2G(I) Super Seasprite helicopters which are operated by the RNZN and maintained by the RNZAF.  They are primarily used as integrated air assets from the HMNZS Canterbury and the two ANZAC Frigates of the New Zealand Navy, in order to provide a range of capabilities from logistic support to combat operations.

HMNZS Canterbury multi-role vessel (MRV) of the Royal New Zealand Navy is believed to be positioned in the Coral Sea off CQ.