During the afternoon on Saturday 8 July a nice pair of of Australian Defence Force (ADF) helicopters touched down at Rockhampton Airport no doubt in support of joint Military Exercise Talisman Saber 2017 (TS17). 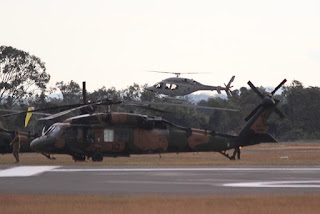 The second chopper was identified as Royal Australian Navy (RAN) Bell 429 'Global Ranger' helicopter N49-049(049), which touched down at Rockhampton Airport after completing airwork around Great Keppel Island.  It was heard to be using the radio callsign of "Medusa 49". 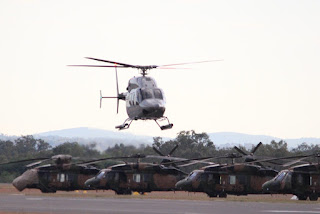 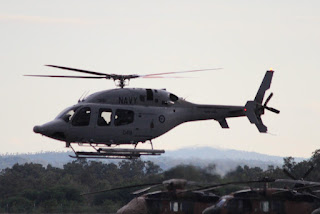 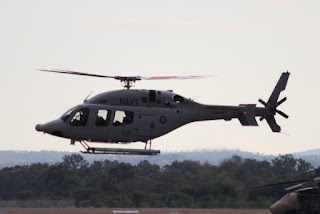 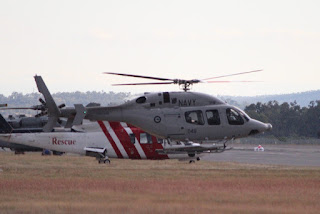 It has earlier flown up from the South also was noted also calling into Hervey Bay (Fraser Coast) and Gladstone Airports for fuel before continuing to Rocky.   As shown, "Medusa 49" took a parking spot beside Rocky's Cross Runway 04/22.

Of interest, the Bell 429 is one of four flown by 723 Squadron - a Royal Australian Navy Fleet Air Arm squadron - based at HMAS Albatross at Nowra in New South Wales.

Finally, in other helicopter movements around Rockhampton Airport on Saturday 8 July, one of the US Navy Seahawks departed, while another pair of visiting choppers flew across to the Talisman Saber 2017 Open Day at the Rockhampton Showgrounds - see Blog post above - coming soon!

The United States Army (US Army) Sikorsky UH-60M Blackhawk helicopter 12-20435 departed from 'Camp Rocky' to the Rockhampton Showgrounds and back using the radio callsign of "Wolfpack".  It was joined at the Showgrounds by  Australian Army NH Industries MRH-90 Multi-Role Helicopter A40-015 which flew across from Rockhampton Airport as "Destrier 15".  After being on display, the MRH-90 departed the Showgrounds directly for Townsville.

And one of the two United States Navy (USN) Sikorsky HH-60H Seahawk helicopters was heard to depart from Rockhampton Airport for Townsville.  I believe it to be 165121 / NW-313 which was heard using the radio callsign of "Firehawk 11".

All photos taken by Daniel Bishop  ©
Posted by Damian F at 10:53 PM