On Friday 21 July, Royal Australian Air Force (RAAF) Canadair CL-600-2B16 Challenger 604 bizjet A37-002 was photographed parked at Bundaberg Airport by local plane spotter Dan B.  It is believed that it arrived from the South on Thursday 20 July. 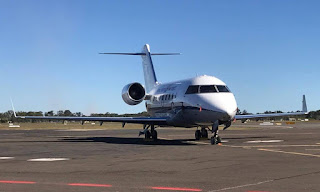 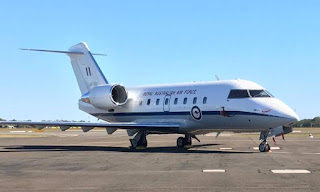 A little later on Friday, A37-002 was heard to depart Hervey Bay (Fraser Coast) Airport for the South as "Consort 40.

Meanwhile, also on Thursday 20 July, fellow RAAF Challenger 604 bizjet A37-003 was also believed to have called into Bundaberg Airport also from the South but as "Envoy 28".  This is not 100% confirmed though.

Both Challengers are flown by the RAAF's VIP 34 Squadron based at RAAF Base Fairbairn at Canberra.

Thanks to Dan B from the Wide Bay / Bundaberg Plane Spotting Group on Facebook for allowing us to share these great photos!