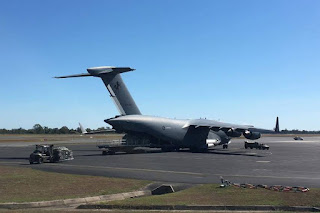 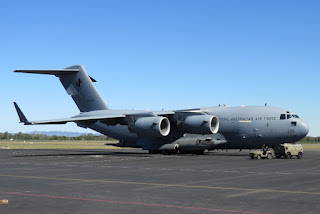 After looking to offload some equipment, it departed Rocky for RAAF Base Richmond.

Royal Australian Air Force (RAAF) Lockheed C-130J-30 Herc A97-441 has been noted completing various flights between Rockhampton and RAAF Base Richmond as "Trojan 06".  Fellow RAAF Herc A97-465 continues to fly around Rocky and the Shoalwater Bay Training Area (SWBTA) as "Mambo 20".

Of interest, A97-465 has also been noted flying in formation with one of the two United States Air Force (USAF) Special Operations Squadron Lockheed MC-130J Hercules aircraft which remain based at Rockhampton Airport.

On Wednesday 19 July, A97-465 was joined by 13-5775 and flew together putting on a spectacular show as they completed an 'initial and pitch' when arriving back into Rockhampton Airport.

Finally, the Royal New Zealand Air Force (RNZAF) Lockheed C-130H Hercules NZ7005 continues to complete various flights in and out of Shoalwater Bay from both Richmond and Amberley. It has again been heard to be using the radio callsign of "Kiwi 10".

Photos and video taken by 'IAD' and Nicole Ramsay  ©
Posted by Damian F at 9:59 PM