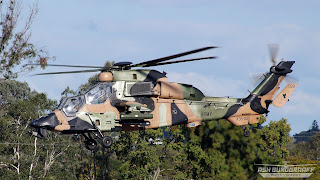 Meanwhile, an unidentified Australian Army NH Industries MRH-90 was noted also calling into Rockhampton Airport later still on Sunday 23 July as “Destrier 11”.  It arrived from and later departed back to Shoalwater Bay.

Thanks to Ash B for letting us share his great photo!  Do yourself a favour and check out his growing album of stunning photos from Rockhampton during TS17 as captured by Ash on his Flickr account at:  https://www.flickr.com/photos/124156252@N03/