Late on Saturday 15 July, local photographer Ash B was at the right place at the right time as Royal Australian Navy (RAN) Sikorsky MH-60R Seahawk 'Romeo' helicopter N48-015 (Code 915) touched down at Rockhampton Airport for a short period of time. 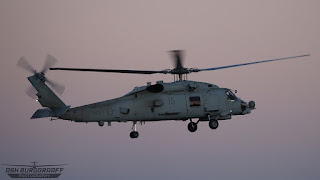 It was heard to use the radio callsign of "Tiger 15" and departed a short time later to the North-East.

This is only one of a handful of visits into CQ by the RAN's newer MH-60R Seahawk 'Romeo' naval combat helicopters.  The MH-60R is the RAN's next generation submarine hunter and anti-surface warfare helicopter and will form a very important part of it's operations for years to come.

The MH-60R is equipped with a highly sophisticated combat systems designed to employ Hellfire air-to-surface missiles and the Mark 54 anti-submarine torpedo. The primary missions of the 'Romeo' helicopter is anti-submarine warfare and anti-surface warfare. Secondary missions include search and rescue, logistics support, personnel transport and medical evacuation.

The MH-60R and its mission systems will replace the fleet’s S-70B-2 Seahawk aircraft.

Thanks to Ash B for letting us share his great photo!  Do yourself a favour and check out his growing album of stunning photos from Rockhampton during TS17 as captured by Ash on his Flickr account at:  https://www.flickr.com/photos/124156252@N03/