On Friday 21 July, the Cessna 560 Citation Encore bizjet VH-YUL of the Yulgibar Pastoral Company (of Montmorency, Victoria) touched down at Rockhampton Airport Baryulgil in Northern New South Wales via Archerfield. 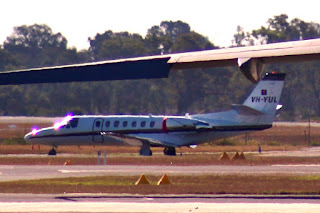 It then departed out to Emerald Airport but returned to Rocky a little later in the day.

It remained parked at Rockhampton Airport on Saturday 22 July - as shown above.

On Sunday 23 July, VH-YUL departed Rockhampton Airport for Baryulgil before it headed further South the Melbourne (Moorabbin) and then Melbourne (Essendon).

While departing Hamilton Island Airport on Sunday 23 July for Port Macquarie was Cessna 510 Citation Mustang VH-VSQ.  It had arrived from there on Wednesday 19 July.