Some interesting 'shuffling' of helicopters operated by RACQ LifeFlight Rescue around the Fraser Coast with Bell 412 VH-XCN taking up residence at and now operating from Bundaberg Airport as "Rescue 522". 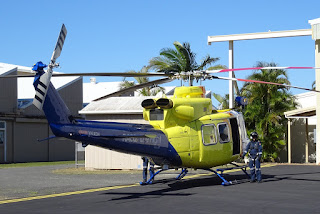 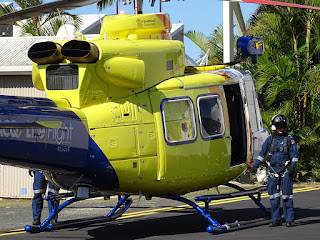 Local plane spotter Micah S was on hand recently and captured some photos as it departed recently on another medical evacuation flight. 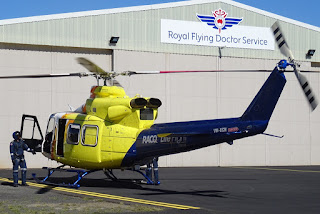 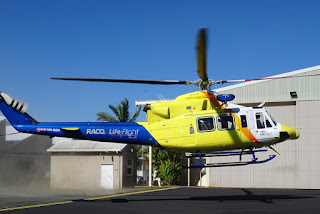 Meanwhile, the Agusta A109E Power VH-ZCF and both Kawasaki BK117 B-2 helicopters VH-BKV and VH-EHQ that had previously operated out of Bundaberg Airport with LifeFlight at various times have all gone is separate and different directions.

VH-EHQ was transferred to LifeFlight's Mount Isa base where it is now operating as "Rescue 400".  The former Mount Isa-based LifeFlight Bell 230 VH-XCW was noted flying into Archerfield via Roma Airport last Thursday 20 July.

VH-BKV flew into Tasmania in late June and commenced operations out of Hobart Airport.  It has also been re-registered to Rotor Safety (Skyplan Australia) based at Rosny Park in Tasmania.

And finally, VH-ZCF has been acquired by Flyon Helicopters at Mackay Airport and operates alongside fellow Agusta A109E helicopters VH-XUM and VH-RUA on helicopter marine pilot transfer operations and other general charter work.

All Flyon activities are carried out under the AOC of Jayrow Helicopters.

Sincere thanks to Micah S for taking the time to capture and send through these great photos of VH-XCN at Bundaberg Airport.