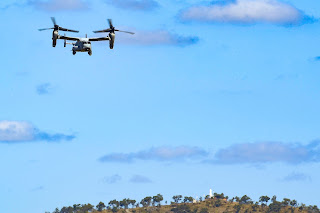 From a photo I’ve seen (which I won’t be posting here) it appears that the Osprey was 168032 / EP-09.  It was heard using the radio callsign of “Puff 01” and touched down at ‘Camp Rocky’ presumably from the USS Bonhomme Richard (LHD 6) and after a short while on the ground, it reportedly departed to Townsville. 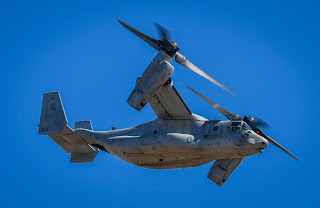 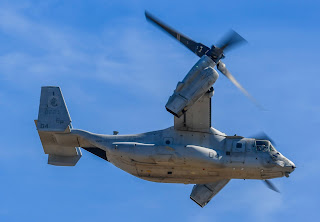 Of interest, fellow USMC MV-22B Osprey 168221 / EP-04 was photographed (shown above) also arriving into Townsville (possibly) from the USS Bonhomme Richard but as “Puff 62”.

Both Ospreys are flown by the Marine Medium Tiltrotor Squadron 265 (VMM-265) "Dragons", which is part of the 1st Marine Aircraft Wing.

Meanwhile, at the same time as the Osprey was at ‘Camp Rocky’ on Sunday 21 July, a pair of other USMC helicopters were noted also calling into ‘Camp Rocky’.  They were identified as a Bell AH-1Z 'Viper' and Bell UH-1Y ‘Super Huey’ and were flying together as “Komodo 31”. 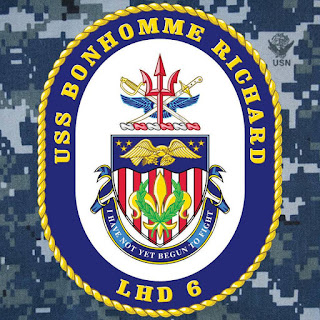 Both helicopters are also flown by the Marine Medium Tiltrotor Squadron 265 (VMM-265) “Dragons” and form part of the 31st Marine Expeditionary Unit (MEU).

Again, sadly, there are no photos available from all three aircraft/helicopters visit to Rocky on Sunday.