On Tuesday 4 July, Virgin Australia Embraer E-190 VH-ZPQ looked to have departed Australia for good, flying out of Brisbane for Apia (Tonga) as VOZ9901.  It has since continued to Honolulu (Hawaii), Van Nuys (California) and Nashville (Tennessee) for post-lease maintenance.

VH-ZPQ was ordered by Virgin Blue in 2007 and it was delivered to Brisbane in February 2011 in an all-white livery.  It was rolled out at Brisbane in a livery promoting the Australian Football League (AFL) in March 2011 and entered service with Virgin Blue soon after.

The airline was rebranded in May 2011 and in October 2011, VH-ZPQ had the AFL decals and titles removed at Melbourne and was repainted into Virgin Australia livery.  It was also given the name  'Main Beach'.


Of interest, VH-ZPQ was withdrawn from service in late June with the aircraft's final ever revenue flight being the VOZ613/616 rotation from Brisbane to Mackay Airport and back.

Meanwhile, as previously mentioned, Virgin Australia plans to consolidate its turboprop operations to routes within the ACT, New South Wales and Victoria as it prepares to reduce the number of ATRs in the fleet from 14 to six.  As a result, the airline will end ATR 72 turboprop operations in Queensland.

It appears that back on Friday 16 June, ATR 72-500 VH-FVH - the airline's original ATR - departed Australia for good.  It was noted departing Brisbane for Nelson Airport on New Zealand as VOZ9948.

On previous occasions, Virgin Australia ATR 72s have flown to Nelson for planned maintenance, but at the time of writing, information suggests that VH-FVH may not be coming back.

VH-FVH was the first of four ATR 72 aircraft ordered by Virgin Australia in 2011.  It was registered to and operated by Skywest Airlines (Western Australia) on behalf of Virgin Australia.  VH-FVH touched down at Brisbane on delivery in August 2011 and it was noted wearing the name 'Four Mile Beach'.

Soon after, VH-FVH was spotted on display at Bundaberg Airport during the Wide Bay International Airshow on Saturday 20 August 2011 - as shown below. 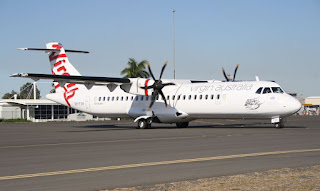 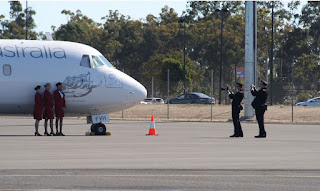 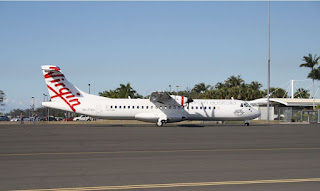 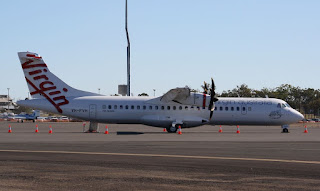 During the coming weeks and months, VH-FVH was used on route proving flights before it eventually entered service by operating the DJ1711/1714 rotation from Brisbane to Gladstone Airport and back on Monday 17 October 2011.

I also had great delight in travelling on board VH-FVH as it operated the first ever Virgin Australia Regular Passenger Transport (RPT) flight out of Emerald Airport on Monday 16 January 2012.


You can read more about that trip from Emerald to Brisbane and see many more photos by reading the TRIP REPORT HERE!

The decision to reduce Virgin’s ATR fleet, as well as its Embraer E190 regional jet fleet, was first announced in June 2016.

Sad to see them go!